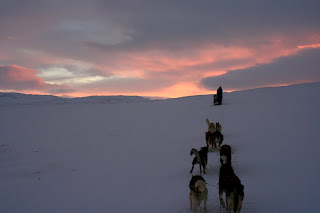 On the 12 we were up in the mountains again. And again it was wood transportation that was the prime object. But of course, it is good training as well. Since my brother Espen also came along we had to bring all the dogs along, pups and retired dogs as well as the race dogs. The young and old were left at the base camp cabin while we were up in the mountains. For the 7 months pups, Tutta and Smirre, its good training to do some running whit the adults. Staying on the stake out line on new places is also a valuable experience. When it comes to running, the pups are really looking good. They seem to love running, are hard pullers and are really serious when at work. 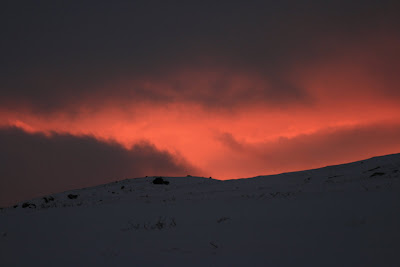 The weather is a story of its own. No wind and partly clouded. This made for some fantastic colors. The sky was going from pink and orange to deep blue. The snow was kind of pink and deep blue. Moments like this make up for all the hours spend training the dogs on the ATV in pouring rain in September and October, all the hours spend looking for good snow conditions early in the season.

In the evening, Tommy and Ronny came up whit their 21 dogs. All together we had 43 dogs sleeping outside the cabin. One would think that this would ad up to a lot of barking. But the dogs know that they are supposed to be quiet. Except for feeding time, and when taking of in the morning, the forest is silent.


The second day me, Espen and Tommy went up to Dærtahytta whit 12 dogs each while Ronny was taking care of pups on old dogs down by the cabin. This day was all you can ask for. The dogs were really eager. They were working hard and running fast. Going in to Dærta, whit 150-200 kilos in the sleds we used one and a half hour on the 22 kilometer run. Going back again we were going whit an average speed of 15,8 km/h. We were satisfied. The next day the dogs was even more enthusiastic, using just under one and a half hour on the run to Dærtahytta. Going home they averaged 17,6 km/h. This is a speed and enthusiasm that make us satisfied. But, it´s still early in the season. 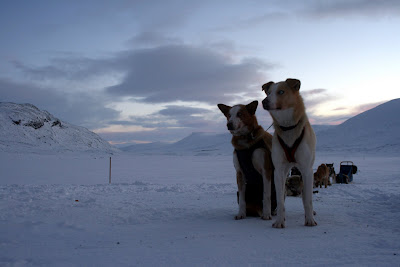 Whit the bad snow conditions we have had the last weeks, Devvdes and Dærta area is one of the few areas in Troms whit good training conditions. And now this is “safe” to write, because at last is`s snowing. So hopefully I can take some training runs at home this week.

LATEST NEWS: It was snowing all weekend and Monday as well. The last couple of days have been deep snow swimming on the trails back home.
Posted by Aslak at 16:50