On the sled again!! 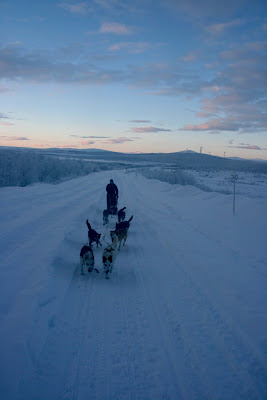 Monday last week (November 5th) the snow finally came. But still it is not enough to go out whit sleds. It still helps to have some snow. It is better for the paws to run on snow than on gravel. But for me it is the boring task of sitting on the ATV. And when the temperature drops down to -15c it is cold. So when I heard that it was half a meter of snow in Kiruna in Sweden I loaded up the dogs for the four hour drive over to the white stuff. What a joy for man and dogs!!! The first day we took two teams of seven dogs for a 25 kilometer run and the next day we did 50 kilometer. Yesterday I took all 14 dogs in one team and went for another 50 kilometer run. Pure joy. The dogs was happily running, and I could feel the power in the team!
Back home again it is the same conditions than when I left, 10 cm of snow. So I am afraid it is back on the ATV for still some days.
Anyway, I am on schedule, the team is getting stronger, and everything looks fine. I think I am the one who have the biggest need to get going whit the sled, not the dogs.

Although it is little snow Espen is training our 3 half year old together whit one good old leader on the sled, doing 5 kilometer runs. For them it is all about learning the basic.
So for now it is just to hope for snow. I have a hope that it will at least be possible to go up into the mountains in the end of the week to do some sledding. Time will show.
Posted by Aslak at 18:38

Hi A,
Nice to see you with your dogs on the snow...sad to hear no snow in Norway yet. Here we are also hurting for snow...there is a little but not much. I do hear about 5 hours north there is 200cm...I guess I should move NORTH! Despite a lack of powder I am still exploring carefully on my skis :-)

Did you get a name for your puppy yet?

Hugs from across the ocean,
Michelle