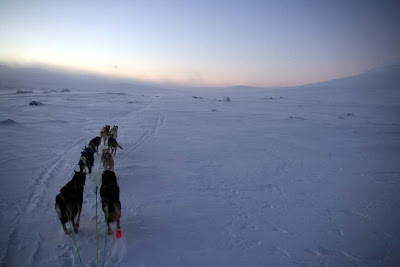 It is a long time since my last entry on the blog. So what is going on? Yesterday we finally got some snow, about 20 cm. This is the first snow we have had since long before Christmas. I have not been able to train the dogs whit sled from back home since the first days of December. This has made a lot of work, or more precisely, a lot of time in the car.
In December we could do some training in the mountains of Dividalen. I have also been some (6) times in Kiruna, since November, a four hour drive each way. We even had to do some training with the ATV in January!!!!!! just to get the dogs out. 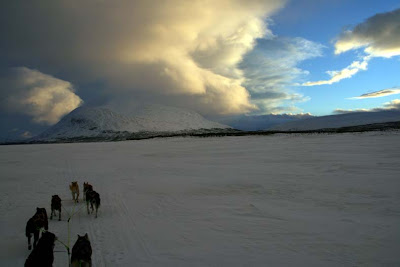 Lake Altevatn, that usually provide good training conditions have also suffered lack of snow. It has up to recently been more or less just ice up there. But some days ago we could finally go there as well.
So what do this mean for the training of the team? It means that we have been training longer distances but not so often. I have had three trips of 200km and a lot of 50-60 km trips, but no short, fast and fun runs. So the dogs have the same distance as last year, but they lack a little of the spirit needed to run fast.
Now that we finally have got snow we are going to do some short trips back home this week before I do some longer trips over the weekend.
The situation in the dog yard is that 13 of 14 dogs are in good shape. Smirre, one of my yearlings have had problems whit a sore wrist and have been resting quite a lot. So I don't think he will be ready for the Finnmarka race. This mean that I have to borrow one or two dogs. And that should be no problem.
That's it for now. So its just to hope for good snow conditions for the last 6 weeks. 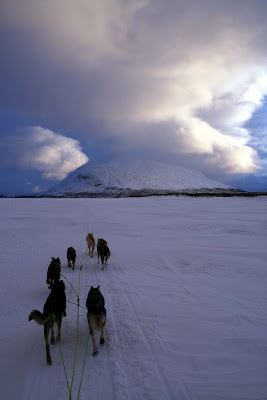 Hi Aslak,
The light looks beautiful in the pictures but sad story about the snow. It's been snowing like crazy down here and I am in a winter wonderland. I need some dogs to pull me up the mountains!!! In fact, I did go ski touring with a friends dog today (lab-husky mix) and he had a harness I attached to my back pack waist strap. The dog ran fast. It didn't pull me up but it certainly made me walk fast. I will investigate dog options in the next couple years :-) Good luck with the training!