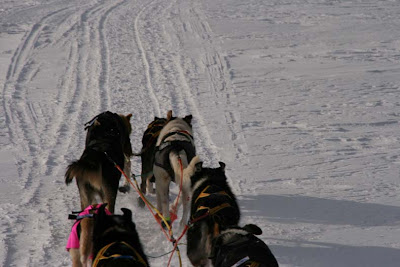 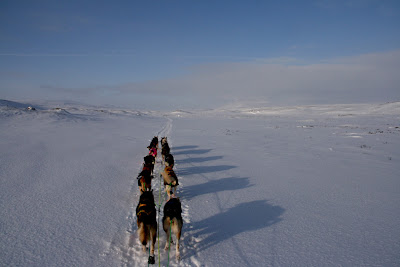 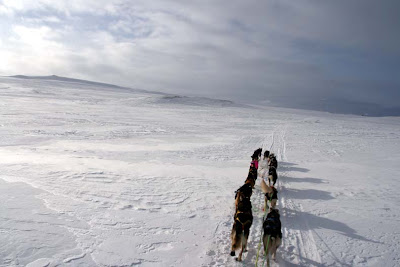 I have not been that good to update my blog this winter. I am sorry for that. But at least, here is an update before the Finnmarksløpet 1000km. I am ready, just waiting for the start next Saturday ( march 8th) in Alta. The dogs are just as I want them now. The energy level in the dog lot is high. Although there was hardly any winter before early February I have got the 3500km of training I was aiming for. Of course it could have been better training whit more long runs, but when the winter is totally f... up, you have to adjust to that.
frustrated that I am running slow, its hopefully because I rest. To day I had a nice 60 km run in the mountains. The team is working good. Now its just to hope that they will do just as well when racing. I have a race schedule that says a lot of resting early in the race. I will be resting between checkpoints as well on some legs. So if you are getting Espen will be in the home team, sitting in front of his Mac and talking in the phone for the hole race. He will be leaving coments on the race on his blog as well as on my neighbours race blog
This might be a good source for information during the race.

About the team. I have presented this years team in an earlier entry, I think. But there have been some changes. I will start whit 11 of my dogs, and borrow 3 from a friend of mine. The dogs that will run is Gunnar, Momba, Sting, Trangia, Elvira, Kaos, Elton, Tutta, Dønning, Kesam and Vosko of my dogs. I will also use Sara, Chilli and mr x from Arne Liaklev.
The three dogs from my team that is not coming is Smirre: he had some injuries en the early part of the snow season and lost to much training. Sunda has developed epilepsy, so I don't find it wise to take here along. Our good old leader and grand old man Skare decided it was time for him to go over to Leonard Seppalas team, running down the endless trail and resting on fresh straw every night. Thank you Skare, for all the good miles we made together and I hope you are fine on the team on the other side.

Well, in some days I am of to Alta. I am ready and fit for fight.
So long.

I wish you a beautiful race! I regret that I will not be able to follow you from day to day, as I will be touring in Setesdalen with Lies and Hanno. Also best wishes for the dogs, specially for Elton, who was in "my" team two weeks ago!