I know it is a long time since my last entry here, and I am sorry for it. I should have been writing some from the Finnmarka Race weeks ago, but there has always been something else that had to be done. To make it clear, I am not so disappointed about the race that I have not been willing to write about it. In fact, to scratch was the only sensible thing to too this year.

All ready before I got as far as going to Alta I got the first setbacks. Skare, our old trusted leader, decided joined his forefathers and is now running in Sepalas all-star team. Then, one week before the race, Elvira got back from a training run whit a sore shoulder. Luckily I got to borrow three dogs from Arne Liaklev.

So coming to Alta the first i did was to pick up Sara, Chili and Puma. A little special to start the race whit tree dogs I did not know. 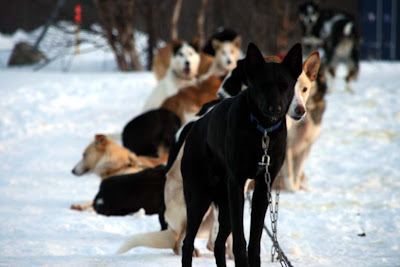 The start in down town Alta is always exciting. More than 1000 dogs ready to race makes some noise. In open class we only use 10 dogs out of Alta of security reasons. The last 4 we add to too the team at the restart 15 kilometers up the river. 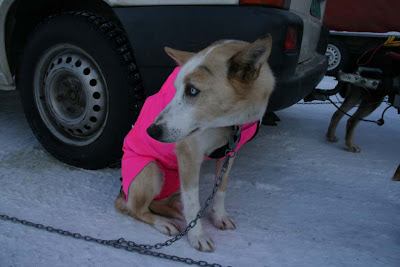 Nine of my ten dogs were just standing or lying down waiting. Vosko had to have one person calming him down. I like it this way. Its called self control. But at the restart I had no chance to keep the dogs calm. This is one hour of intense barking. After that it is days of silence waiting. 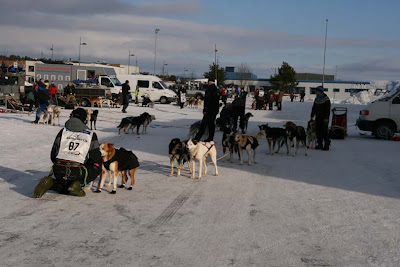 The first legs, to Skoganvarra and Levajok were familiar terrain and mostly everything was just ok. But half way to Levajok I had to put Sara in my sled. She got an injury in her shoulder and started to limp. The race was over for her. Unfortunately she was not the only one that had to leave my team in Levajok. Chili and Smirre also got sore shoulders and Momba a sore wrist. Why four of my dogs came down whit injuries is hard to say, but I think it was going down from the mountain they got it. The trail was quite bumpy, and I should have used the brake even more. This was a set back and my mood was not the best. 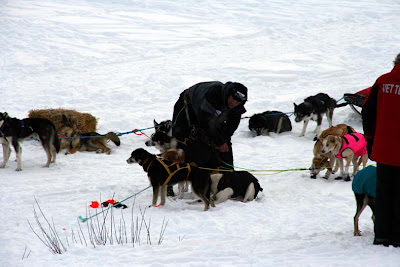 But I started out whit an intension to take the rest of the trip one checkpoint at the time. Going over to Skippagurra we had some wind and snowing crossing the mountains. Gunnar was doing his job really good. We even had to help a team that would not go in the conditions that the mountain provided. After six hours we were back under the tree line and it was time for a rest. After three hours it was back on the trail. 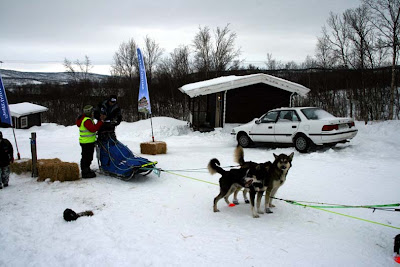 We had a good rest in Skipagurra, then went over to Neiden, were I arrived right after midnight (late Monday/early Tuesday) and a mandatory 16 hours rest. I can tell you it was good to get some sleep. Since Saturday I had only got six hours of good sleep myself.
Neiden to Kirkenes was pure joy. The team was doing great, and when I took a rest half way they all attacked their food. Coming in to Kirkenes I was starting to get tired again and I was a bit cold although it was just around zero degrees (32F). While trying to get some sleep I understood that something was wrong. I was laying inside a warm room in my winter sleeping bag whit my woolen underwear on and freezing. When I got up after 2,5 hour of sleep my handler Lotta soon was quite sure I had a fever, and ordered my back in bed for one more hour. After some more sleep and food I was still not feeling great. Of course not, I told myself. This is day four of a seven + days race. I am just tired. 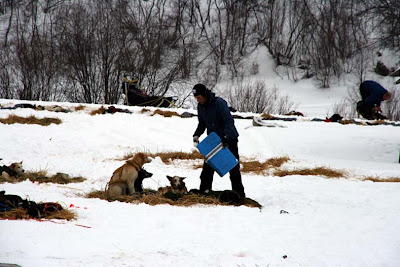 So I got down to my dogs to take care of them again. Kaos was still sore inn here muscles so I decided to drop here. She had done a fantastic job, and had been my best dog so far. Tutta also left the team whit a sore wrist. So whit 8 dogs I started back to Neiden after 9 hours of rest, three more than planed.
I have to say that before going I was really close to scratching. But my good friend Tommy got me going. He has done the race many times himself but was a handler this year. According to him I would feel better whit my self if I tried to go on and see if the fever got better. He meant that I would never forgive my self if I quit now, and the fever was gone in the morning. 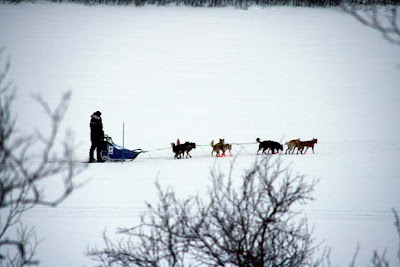 I can tell you that I was cursing him sometimes that night. It is the hardest time I have spent together whit my dogs. I was freezing inside my big down parka and it was hardly below 0. And I was exhausted. Many times that night I was planning to take the dogs straight to the car as soon as I reached Neiden. But in the end I did not. You never quit a race coming in to a checkpoint. After taking care of the dogs and three hours of sleep I went back to take care of the dogs. I still had a fever, and was thinking of scratching. Some of the dogs were a bit sore in their wrists, but they could still go on. But in combination whit my fever I found out that the best solution was to give up when we still had some fun. I could not be the last dog on the team in my condition, and that would mean harder work for the dogs. The decision was not hard. It had been a process that started in Kirkenes and I had given it a lot of thought during the night.

I scratched on Thursday morning. Friday night I still had fever, which I was quite pleased whit. My decision had been right. 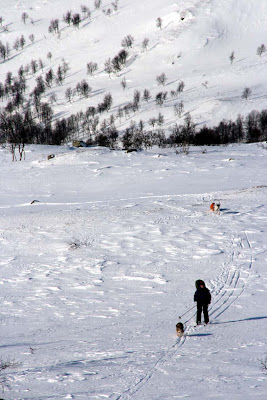 In the weeks since the race I have spent my spare time skiing in the mountains and I have been on some trips whit the dog. The young ones are given some more attention and we are trying to train them a bit to. 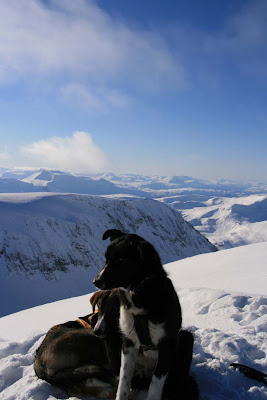 Trangia has moved to a neighbor, and Sunda and Dønning are soon ready to go to new homes. We are also looking for a new home to Sting. The reason for this is that we have 7 young dogs ready for the team next season. I will not be going to the Finnmarka race in 09. Whit so many young dogs we will not have a 14 dog team, and I am not going back to the 500 kilometer (8 dog class). But we hope to have someone run the 8-dog class whit the dogs that are old enough.
Posted by Aslak at 16:40