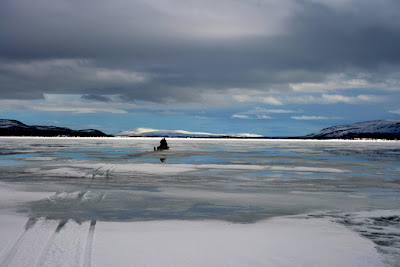 Never start a trip at Friday the 13 if you are not inn for a challenge. But that is what I did, although I was not looking for a challenge, but a nice and easy trip. Whit me I had two young French men, Antoan and Thomas. The plan was to go from Jukkasjärvi to Devvdes via detours. On Friday the 13 we met Espen in Jukkas, to were he came whit 40+ dogs and some tourists. We took whit us 20 dogs and started out. On Saturday everything started well. The morning air was nice and chilly and everything looked OK. But that was before we took of the beaten Swedish snowmobile tracks and crossed the border to Norway and lake Leinavatnet. 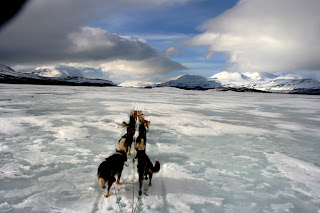 The lake was 12 kilometers of water on top of the ice. So at the end of the day we had wet feet's, it was above 0 and blowing. At the shore of lake Altevetne we set camp and tried to dry our shoes and socks.
My hope was colder weather during the night and a easy run on in the early hours of the morning. But no. It was raining during the night and the snow was getting rotten all around us. But we started out, heading towards lake Irgas in Dividalen. But first we had to run through some more water. Luckily we had a snowmobile trail we could follow through the forests. Whithout it it would not have been possible to get anywhere. Hitting the lake it was of course water again. But we got were I wanted to go, put up the camp, slept in the sun and tried some ice fishing. 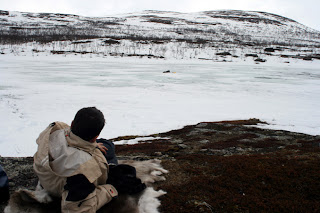 Next day again early start, but still wet lakes and rotten snow. The worst was lake Darfall whit about 20 cm of water on top of the ice. After a short visit to the Swedish trail system it was back over the boarder and over to Skakterdalen. But here, whiteout any trail it was really hard work for the dogs. They broke through the snow and was more or less floating on their bellies. At the worst spots I had to help them break trail. After some kilometers of this I ordered stop and rest for the dogs.
What I had planed to be a nice trip whit a lot of detours now was more about getting home before the snow turned into spring slush. Again I was hoping for a cold night, although I was beginning to give up hope. But at last we got it. When putting up the camp for the night(day, afternoon, whatever, who cares abut time?) I suddenly realized that I had forgot my tent in Dividalen. So I had to spend a windy night in my sled while the boys had a nice night in their tent. At 4 in the morning we started out, it was blowing and snowing. GPS weather! But who cares? I don't as long as its hard snow and fast going. A little before 8 in the morning we found our self at the parking lot at Devvdes. It was still snowing, and since we got back it has been nice cold nights, perfect for roaming around whit dogs. So, what to learn? Never start out on Friday the 13! 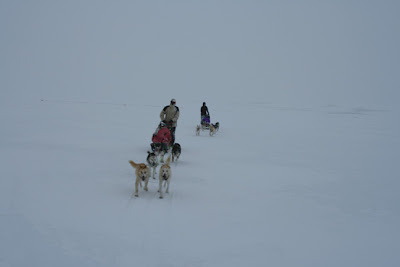