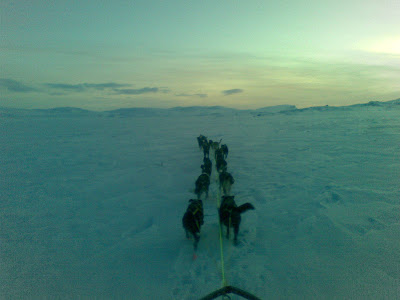 Into the arctic mountains.

Its dog-season again. It has actually been that since August. So I think it might be time for some updates from the deep forest. This year WE HAVE WINTER!!!!!!!!!!! We have been on snow since early November and it has been below zero since the snow came. We have about 50km of trail out of the dog yard, and can go everywhere in the mountains. What a difference since last years F.... up winter
Life is going well, we are well installed in our new house and the training of the dogs is taking a lot of time. And this is the reason for the missing updates. There is a lot to do whit the house, and that takes quite a bit of my spare time. There is a bathroom to be made, a kitchen to readjust, insulating the roof and so on. And its the dogs of course. This year we are not training as much as earlier, and we are 3 persons to do the training, so at least I have some time for working on the house The reason that we are not training as much as the last years is that 7 of 16 dogs are yearlings, and we do not want to train the young ones to hard. They are not going to race this year, so the training we do this winter is more a preparation for next year (dog mushing is always next years sport). But the adults are going to do some racing. Lotta is going for Finnmark 500k (http://finnmarkslopet.no/race/musher.jsp?year=2009&entr.id=1219). And I will run Troms Quest, a new early season race we are having here in Troms. 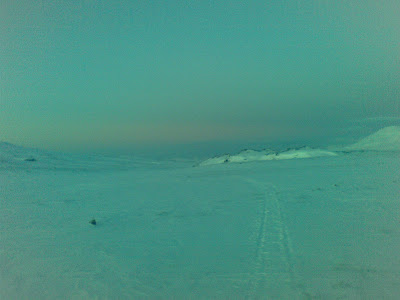 To day I have been in to Dærtahytta for the first time this winter (we have been part of the way some times all ready). I took 15 of the 16 dogs whit me in one team (Vosko is resting after some surgery) . That is a long team! It was OK, whit 80 kg of wood in the sled (for the cabin), I was able to control the team and get the speed down. The weather was as good as you can get it. Clear sky all around, pink, yellow, orange and blue. And on the way home an almost full moon!!! Espen is out now for a second run after 4 hours of rest for the dogs. He is running under the full moon during the arctic night. I wish it was me! 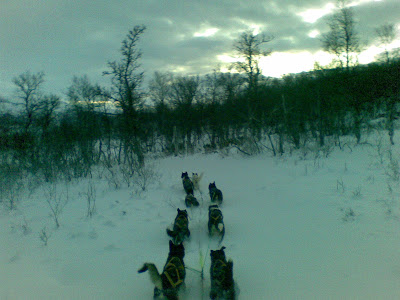 On Sunday I was braking some new trail from Rostadalen to Devvdes. This is part of the Troms Quest trail. It was new ground for me and the dogs. The trail looks good, its just to get it well groomed for the race. At least I have started. It was heavy conditions and slow going, but good fun. That's all for now, hope to be back soon.
PS I keep on forgetting my camera, so all the pictures are taken whit my mobile phone, sorry for the bad quality.
Posted by Aslak at 19:55