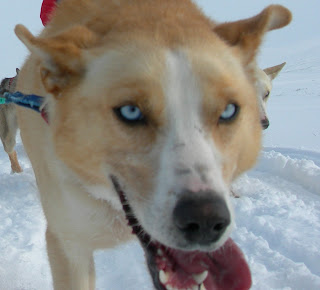 An important part of running dogs is competing whit them in races. The main goal for the season is the Finnmarksløpet in March. But on the way there we are always looking for answers to some questions: how are the dogs compared to others and are my dogs faster than my friends dogs? When we are training alone most of the time we never get the answers. We have a feeling about how the dogs are doing, but to really know you have to compare them to other dogs. So last weekend I took my team and my brothers yearlings over to Kiruna in Sweden for a small race. We were racing over two days, 80 kilometers each day. 10 teams in the open class and 5 in the 8-dog class. I was competing in open class whit 14 dogs.
The race is called " Tobacco Trail" after the name of the trail we were following. The trail has its name from former times when it was used to smuggle tobacco from Finland over to Sweden and Norway. Its the first time the race is run since 1993, so its not a big happening, yet. But it was a quite strong field of mushers. Most of us aiming for Finnmarksløpet or Femundsløpet, or both.
The start was from Kiruna sled-dog clubs(www.kshk.se) cabin outside Kiruna, and the mid way point was the Sami village of Soppero where we staid at Per-Nils and Britt-Mari Paivo´s lodge (www.mineallin.com). The trail is quite flat running through pine and birch forests, over frozen lakes and marshland.
The start was at 2 p.m, and we were running into the early darkness of the arctic night. The temperature was 18 below at the start and dropping to about 30 below over the lakes. But when you are well dressed, its OK. For the dogs it OK as well. I have some dogs in my team that I run in coats at this temperatures, mostly males. There is one part on the males that is prone to frostbites, and that is the main reason for putting coats on them. I don't think I have to say anymore about it, the men who read this will understand.
The trail was quite soft the first day, and some parts was slow going. I have been thinking that my dogs is slow on conditions like this, but I was not slow compared to other teams. After day one I was in fourth place out of ten, and I was satisfied. The fastest team was half an hour in front of me, but between second and seventh position it was a time difference of only seven minutes. I had completed the 77 kilometers in 4h 52 m, and was really happy whit my dogs. They were in good shape, and if I had asked them to take me back after a short rest they would have. But we had to wait for the start on Sunday morning. At 8 a.m, at the early light of dawn, the first team took of, and the rest of us followed whit two minutes between each team. This day the trail had settled, and were it had been soft snow the day before it was now a hard and fast trail. This was favourable for the Swedish and finish mid-distance teams that was competing, and I ended up as #6 in the final standing. But who cares? The dogs was 20 minutes faster on Sunday, they were happy and they were performing good. The dogs kept a good speed all the way, and we had more or less the same speed at the end of the day as we had in the start. This is what I am looking for in a long distance team. Dogs that is rolling along whit a steady pace.
Well, did I get any answers? Yes i did. The dogs are faster than I expected, I have more power in the team that I thought I have, and I was faster than Tommy. And I am doing o.k compared to team it is naturally to compare with.
At last I am sorry to say that I did not take any pictures this time, but I am posting some pictures of the dogs in stead.
For results and pictures from the race:www.kshk.se/ 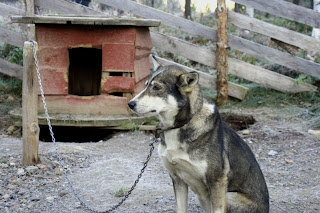 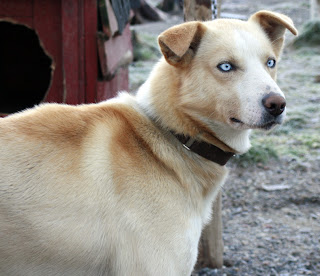 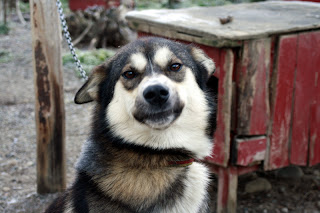