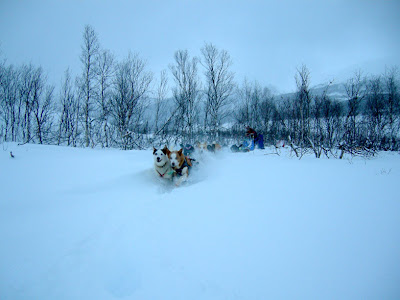 It is snowing outside, and the last week it has come quite a bit of the white powder. A week ago, Espen took all the dogs to Snarbyeidet outside of Tromsø for some wood hauling to some of Troms Turlags cabins there. The report I got from that trip sounded more like swimming than running. And I could see for my self this last weekend, when Tromsø Trekkhundklubb (mushing club http://www.ken-g.nu/tthk/ ) arranged a social gathering at Snarbyeidet. The purpose was to have a small race, to haul wood to the cabins at the same time and to meet other mushers at a time of the year when training takes much time for the competitive mushers. The longest tracks was planed to 60 kilometers and a shorter track on 30 kilometers. The problem was to much snow. There was no chance that the trail breakers could put in the longest trail. It was so much snow in places that the snowmachins had no chance to get anyway. But they was able to put in the shortest track. When I started out as the first team an hour after the trailbreakers returned there was all readdy 5 cm of snow in the tracks, and deeper snowdrifts in some places. Running whit a head lamp was not possible, I was blinded by the lights reflections in the falling snow. I had no chance to see my dogs unless I turned of the light. Just after the half way point ( at the cabin we were hauling wood for) Tommy came up behind my. That is no good, I never like it when my friends are faster than me. But I got my revenge. Tommy proudly says he has the best uphill team there is. So in the steepest hill I gave the dogs their speed command and ran as h.... myself as well. On top of the hill I had left Tommy behind! And he stayed behind. 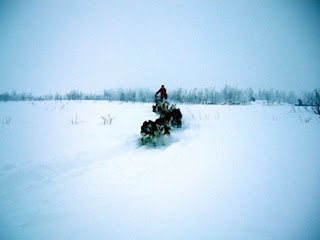 On Sunday the plan was to at least run the same round as Saturday. But it was even more snow and wind now. The trailbreakers couldent even find there own tracks in places when returning from the half-way point. So we decided for a shorter rout and do that two times.
So, although snow is a blessing for us winter addicts, it sometimes creates problems. And whit the weather we have at the moment, it makes for some problems in a modern society. Listening to the morning news, there is a long list of roads that is closed due to weather conditions. Either because of tough conditions above the tree-line or because of ( the risk for) avalanches. 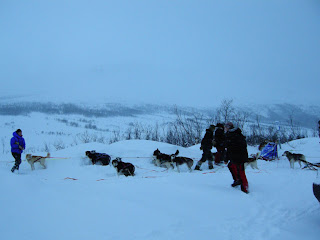 But anyway. I have to get the dogs out and running again this afternoon. The plan was to go to Altevann (Lake Altevann) for a work out. But again, quite a lot of snow there. So instead me and Espen are going to break up the trail we have back home and have a work out here. For the young dogs a part of having a work out is to learn to rest by the trail instead of in the dog yard, so we are going to make a check point in the forest at my place. I will see if I can post some pictures of that as soon as he arrives at cheek point Lilleng.
Posted by Aslak at 09:22