Finnmarksløpet (The Finnmark Race) is getting closer. The main priority now is to keep the dogs happy, healthy and fit for fight. The time for the long and hard runs are over. To morrow I will go for a 80 kilometer run, the last long run before the race. Right now I got the dogs were I want them to be. They are happy and eager to run. There are no injuries or other problems. We are getting ready. Although I didn't have many dogs to chose from I had more in training than I am going to use in the race. The team, as it looks now is:

Sting: Main leader. 8 years. Sting is a running machine. He is really good at keeping up the speed, working hard up front. A bit arrogant, not the one that comes up to you wanting to be petted. But he is there when he is needed. His weakness is soft trails and deep snow.
Petra.

Main leader, 8 years. This hardworking female is half Greenland Husky. A bit shy and not an attention seeker. But she know her job. If there is no trail, snowing and blowing and a long way home, Petra is the dog to put in lead. If she was just a little faster she would have been the complete lead dog. 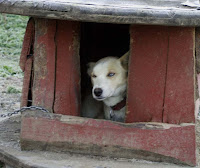 Trangia :Leader, 7 years. My little running machine. She just love to run. On good trails she is the one to put up front. When the going gets tough and the mils long she prefer to run an other place than lead.
Gunnar:

Leader, 4 years. Son of Petra. Gunnar is a happy dog, always seeking attention. He is the one that it´s hard to get the harness of after a 120 kilometer run. He is just happy, never tired. Will go in lead in all conditions, but when there is no trail he sometimes need someone to help him remembering the difference on left and right. 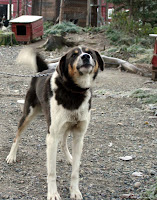 Kesam: Team dog, 4 years. Hard working dog, loves speed. But he is also the dog that gives me most headache. He sometimes could need psychological help. For no reason he sometime start going backward, just looking at me. And I can´t find the reason for it. And other times he don´t want to eat. He behave like the food dish is going to attack him. He hates running in lead.
Dønning:

Team dog, 5 years He is just there, doing his job. You don't notice him before it´s time to take a shit. Then he stops. An honest dog who trust you and that I trust.
Pompen: Team dog, 4 years. Pompens dream is to run lose in a forest,

being able to pee on every tree there is whit out interruption for an hour and then get a big meal. Pompen is not a hardworking maniac and he don´t like speed. But after 30-40 kilometers he is on, when the going gets tough, he pulls. He never gets tired. He is the dog that is happily pulling in the end of a long day.
Vosko:

Team dog, 3 years. Big and happy dog. Loves attention. An honest worker who just keep on going where ever in the team I put him. He wont pick up speed in lead, but he will go on. When I was swimming (post: dog swimming) through almost a meter of snow, Vosko was the one who had to lead. He don´t care if its a good trail, a bad trail or no trail; he keeps on going. But he have no clue about the difference on left and right, its just one way, straight ahead.


Whit this not especially streamlined team I am going to run the Finnmarksløpet. It´s not a wining team, but it´s a team I think I will have a good time together whit. 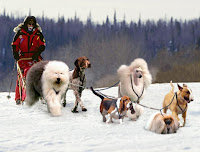 hi Aslak, it has been a long time no see! Good luck for the race and have a good time up there with (i hope for you) not to much chilling wind ;)

I like your team realy , my favs are almost all in it!
The last picture is well chosen to describe your team ;)

So have fun and a good race